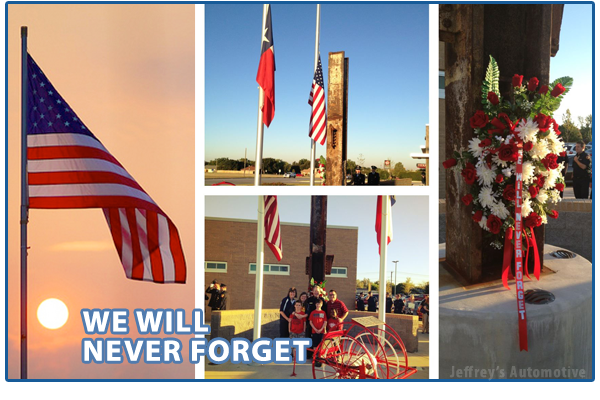 Every year, on the anniversary of the 9/11 terrorist attacks, we remember the victims and their families.  The loss of thousands is not just a personal loss for each family but our country gathers each September for a collective remembrance and time of mourning.

As well, it is a day to honor those first responders – those firefighters, police officers, emergency personnel, etc… who bravely searched for, dug out and rescued lives in the midst of chaos and rubble.  Many of them lost their lives fighting to save those they never knew.

I encourage you if you haven’t gotten out of your car to explore to visit the Watauga Fire Station on Hightower and Whitley Road to commemorate this anniversary. They have a permanent display of a section of the World Trade Center steel beams. On the day of September 11th, many will gather throughout the day to pay respects and weep with those who weep. It is a permanent display, so stop by anytime during the week. It is a powerful visual reminder and real-life artifact from the World Trade Center, so it would be very tangible for younger teens or kids who weren’t born yet when this tragedy occurred.

If you have not visited the monument, it is a subtle yet powerful reminder of the tragedy and heroism of 911.  With over 40 years in the Watauga area community, serving customers in Haltom City, Keller and other surrounding communities like North Richland Hills and Saginaw, we’re proud of the effort the Watauga city officials took to bring this piece of history to our community. Thank you, Watauga!

To get to the fire station, it is 1 block east of Denton Hwy 377 and Hightower Rd (the same street is called Basswood Blvd. west of Hwy 377). The station is technically on the corner of Hightower and Whitley Road.

We will never forget.